What should I do for my horse with a cough and/or runnynose?

Respiratory disease in horses, aka “the snots”, “the crud”, “barn cough”, “strangles”, “distemper”, “pneumonia”, “rhino”—all describe symptoms seen in different equine diseases. Some horse health problems are pretty straight forward. If a horse doesn’t eat with his normal interest, he’s probably not just saving it for later—horses are notoriously bad at “pace yourself” when it comes to food—it’s probably colic. In contrast, a cough and a runny nose is not always…fill in the blank. These symptoms can present a diagnostic challenge to your vet, as they can be caused by many things.

From a medical standpoint, diagnostics is basically a numbers game. They taught us in vet school like this: “if you hear hoof beats, don’t look for zebras”. The common things, like “flu/rhino”, strangles or allergies are most likely the cause of the snots, so rule them out first before looking for something rare, like lung cancer. The signalment, or age, sex and use of the horse must be considered. Next, we must identify the organ system involved. A cough and a runny nose indicates a problem in the respiratory system– not the nervous system. Older horses are not likely candidates for Rhodococcus pneumonia, as this nasty little bug attacks foals between 8 weeks and 8 months of age. Young horses are not likely to have chronic obstructive pulmonary disease (COPD), as symptoms of “heaves” in horses take years to develop.

A typical respiratory scenario proceeds like this: “Doc, Queenie’s been coughing for about a week but ten cc’s of penicillin didn’t help. Some other horses in the barn are starting to cough, too. They have all been vaccinated, but I’m wondering why so many horses have a runny nose and a cough.”

This is when I get to use my Sherlock Holmes hat and secret decoder ring. Although the response to treatment can point us toward the cause, ten cc’s of penicillin is not even close to a therapeutic dose, so there’s no answer here. The signalment has little bearing, as the ages range from six months to twenty five years, mares, geldings, stallions and a few undecided. Vaccination status is no comfort at all, because the “Flu”, “Rhino”, and “Strangles” shots currently available are of dubious value, at best. But the barn, now there’s a clue. About four thousand years ago, a Greek named Hippocrates noticed his horses did better in a pasture than in a barn. This is because enclosed spaces confine aerosolized particulate matter (dust), bacteria, and viruses which can cause respiratory illness. The Greeks didn’t know about germs, that discovery was still 3900 years away, but at least one of those toga-clad Brainiacs was aware that confinement was not healthy. This observation is still valid today—no toga required. When I think about respiratory disease, the anatomy and physiology of the system just amazes me.

Under the microscope, lung tissue doesn’t look like much. Billions of very small vessels called capillaries are suspended in loops of connective tissue around pockets of air. It’s like a fishnet: a bunch of little holes tied together. Through fragile membranes, oxygen is absorbed and CO2 is expelled by red blood cells. Although the lungs of the average horse only weigh about two pounds, their functional capacity is astounding. In a single minute, a galloping horse can move 50 gallons of air through this exquisitely designed system. As movement of oxygen into the body is the most critical factor for all its functions, even minor damage to lungs can have devastating consequences.

Most causes of lung damage fall into one of two categories: infectious agents or physical irritants. The influenza virus, and bacteria known as Streptococcus equi that causes “strangles” are common culprits. However, given enough time, dust in poorly ventilated stalls can cause profound, permanent damage. In man, COPD, emphysema and/or reactive airway disease are expected from years of smoking. I’ve never seen a horse with tobacco stains on his blanket, but plane old dust can have similar effects.

Diagnosis starts with a physical exam. Temperature, pulse and respiration, or TPR can tell us a lot. Pulse rates above 50 per minute, respiration rates above 20 and temperature above 101.5 can indicate potentially serious illness. Blood tests may detect antibodies produced due to the presence of specific bacteria or viruses. These tests can indicate the source of the disease, but they may simply indicate the patient has been exposed, and vaccination will cause a similar response. Polymerase Chain Reaction tests (PCR) are more specific for the actual presence of pathogenic organisms, but they need to be performed early in the course of the disease and they can be difficult to interpret.

Prevention of respiratory disease can be a challenge. Housing in public boarding facilities has inherent risks due to the transient nature of the population, and commonly poor ventilation. I have used one of the newer intranasal vaccines in my patients, and it has been of some benefit. However, no vaccine is fool-proof and they should be used with caution. To limit the effects of dust, horses should be housed outdoors. If this is not possible, stalls should be periodically sprayed with water, and hay soaked for a few minutes before feeding to decrease dust. 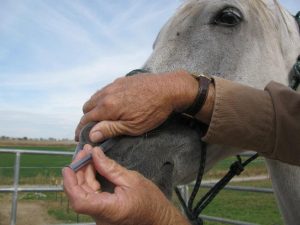 Finally, we must accept that there are risks in everything we do with horses. Most disease-causing organisms are carried by insects or are air-borne, so direct contact is not necessary for transmission to your horse. Inapparent carriers, hosts that are not sick, but still capable of transmitting disease, are common and virtually impossible to detect. Antibiotic resistance is a real problem for treating diseases in animals and man. Although their use may help resolve some bacterial diseases, an accurate diagnosis is a critical part of a successful treatment plan. With this in mind, the “take home message” is: If the horse does not have a cough and a runny nose, don’t worry, go for a ride!