Some things in life are not always as they initially appear. For example, “Buy one get one free” may imply a “gift”, but it really means they just sold you twice as many as you wanted. Although horses seldom mislead us like this, there are groups of various problems that may look similar, but are vastly divergent in their cause and treatment. This why the term “diagnostic” is often as much art as it is science. Some of the simplest wounds can become devastating injuries, while others can look much worse than they really are. Throw in the “panic factor” when “Queenie” is bleeding profusely at 3:00 AM, and you can get a sense for what your vet goes through when you call. A “little blood” looks like a lot of blood when it is coming out of your horse! I have seen what was described as “hemorrhage” being a few tablespoons of blood,and it’s just a scratch look like we’ve been killing chickens for a week!

Diagnostic challenges come in many varieties, but few are more confusing than those involving skin. The equine disease commonly called “scratches” is a classic example of this. Also called “mud fever”, “grease heel”, or, my particular favorite because it sounds so scientific: “equine pastern dermatitis, or EPD”. This malady commonly starts out looking like little scratches, hence the name, on the pasterns. It is often seen in wet environments, especially in horses whose ancestry involved plows (aka draft horses with long hair on the lower legs called “feather”, not “feathers” which is a common dermatologic feature of chickens). It probably starts with some minor cuts or abrasions, but it can escalate to something real ugly. It can cause moderate to severe swelling of the lower legs resulting in altered gait or lameness; thus adding to the confusion, as tendonitis will present with swelling and lameness, and the presence of a wound on the surface can suggest the inciting cause for a damaged tendon. It can also mimic skin cancer, an autoimmune disorder called “pemphigus” -the list goes on.

One marvelous feature in a system full of amazing features is how the immune system responds to invasion by bacteria, fungi and viruses. While most of these microorganismsare harmless ”some are quite beneficial” but a few are pathogenic, existing at the expense of a host animal.

A few years ago, it was discovered why some bacteria are so successful at this. There are species of bacteria that have developed colonies and actually cooperate to form something called a “biofilm”. They stimulate the host tissue to secrete material that looks like slime or scabs that actually protects the bacteria from attack by the immune system. In addition, the bacteria can actually share information that allows them to develop immunity to antibiotics. Knowledge of the biofilm-forming bacteria has given us an advantage in treating some diseases, and disrupting this barrier is an important aspect of therapy. Though this “divide and conquer” approach has been the key to treating many diseases, when it comes to horse skin, it gets complicated.

Horses are unique in many ways and their approach to wound healing is interesting. Skin wounds in most animals will stop “healing” when the granulation bed reaches the level of the epidermis, or external layer of skin. Once this level of restoration is achieved, the layers of skin migrate over the defect and “presto”, no more wound! Horse wounds also heal like this”” except below the knee or hock. Just to be contrary, horses don’t stop healing at the skin margin in wounds of the lower legs, they keep making something called “proud flesh”.(That’s the topic of a whole ‘nuther discussion).

While both problems may share appearances and location on lower legs, management can be quite different. Equine “scratches” usually looks like large, tenacious scabs slightly raised above the surrounding skin. In contrast, “proud flesh” is always pink, usually without much “scab” and bleeds profusely when disrupted. Once a good scab is formed over a proud flesh wound, it is usually best to leave it alone. In a case of scratches, this is actually a biofilm which must be removed before treatment can be effective. Unfortunately, the exudate, or secretions, found in this type of biofilm is so tenacious that removing it can be painful. Dishwashing liquid, corn oil, Avon Skin So Soft, and/or hydrogen peroxide can be used to pull off the scabs, but some horses resent the aggressive nature of this part of the treatment. In some cases, sedation is required for thorough removal.

Think of the biofilm as a shield, protecting the microbes. Once the biofilm shield is removed, many topical treatments will kill the offending microorganisms, but the scabs should be scraped off as soon as they form, the hair clipped from the surrounding region, and the horse housed in a dry area. The key to treatment is “clean and dry”. Wrapping these lesions tends to retain moisture which, in turn, helps the microbes maintain the biofilm, defeating treatment efforts. Some stubborn cases can require long term antibiotics, and a few have allergic or immune components that can take months to years to fully resolve. However, most will respond to simple nursing care.Understanding the roll of biofilm can make treating this disease very rewarding.This may not help your horse win the Kentucky Derby, or the Rolex, but at least he will have beautiful clean legs! 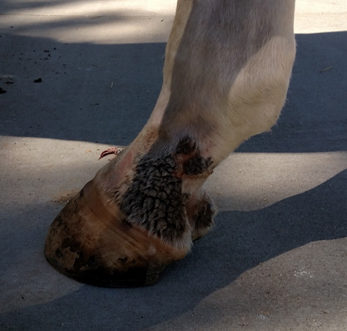 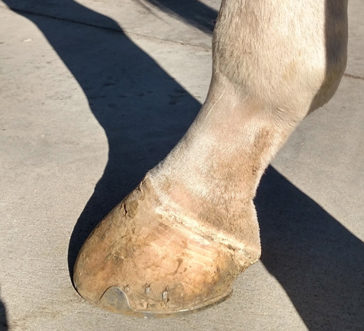 The same horse two weeks after the removal of the biofilm and topical treatment with a mild antiseptic solution.