Technology, leader of that schizophrenic dance between wonder and abject, hair-pulling aggravation, is the source of an amazing body of new information. Much of the new stuff is true, but some of it is fiction, so the internet is not always our friend. My job is to filter the good from the bad. The term “physician” means “giver of laxatives”. The term “doctor” means “teacher”. Having been both, I much prefer the latter. My articles appearing here in Just Horses for the past year have been on specific topics. This month, however, there’s a group of disconnected news flash tidbits that I found fascinating. While they may not be relevant to the way we treat horses today, they are an exciting glimpse of possibilities available in the very near future.

Antibiotics were once a staple of veterinary practice, but bacterial resistance may reduce the effectiveness of these drugs.

Antibiotic Alternatives
The use of antibiotics has been a staple of clinical medicine since Fleming introduced penicillin in the 1930’s. Since then, there have been many antibiotics used to treat bacterial (bad bug) infections. However, there are “good bugs” and there are “bad bugs” and unfortunately, many antibiotics do not discriminate between the two. In addition, there is a lot of resistance among certain bacteria to these drugs. Despite the creation of new drugs, it appears the bacteria have been one step ahead of us for a while. Why bacteria do this is not well understood, but it may be due to our “shotgun” approach to treatment: everything gets a shot of antibiotics. In addition, the fairly recent discovery of “biofilm” is a major factor in microbial resistance to antibiotics.

A biofilm is the congregation of pathogenic (bad bug) bacteria of the same species. These cells form a colony that has a kind of circulatory system to deliver oxygen and other nutrients to aid in its disease-causing efforts. This communal existence creates an environment that protects the individual bacterial cells from attack by other, predatory bacteria or man-made chemicals, aka antibiotics. They are 1,000 times more resistant to antibiotics than non-biofilm bacteria.

The use of good bacteria may provide promising methods for treating some infections without the use of antibiotics. Bacteria literally cover everything on earth and can be grouped in three basic categories:
1) Pathogens, those causing diseases
2) Suppressing bacteria, those that do not cause disease
3) Predatory bacteria, those that attack other bacteria.

Most bacteria are of category 2. They can be beneficial because they suppress the growth of disease-causing organisms. With this in mind, broad-spectrum antibiotics or disinfectants like bleach, iodine or peroxide should not be our first treatment option because they wipe out the good bugs. It’s like using roundup on a lawn; all the grass will die and only weeds will come back. When well-meaning managers use betadine or nolvasan on the private parts of stallions, venereal infections are promoted, not prevented because the suppressing bacteria have been wiped out.

Predatory bacteria, category 3, may secrete products that inhibit pathogens from forming protective biofilms. In addition, predatory bacteria are not harmful, unless you’re a bacteria. Although the use of these microbes is still experimental, they do hold great promise for future treatment.

Another approach to kill the hazardous, biofilm-dwelling species is the use of a class of viruses called a bacteriophages. Imagine that! Treat a bacterial disease by purposely giving a viral disease! Like a space probe in a science fiction movie, the bacteriophage lands on the surface of the bacteria, bores a hole in its skin and injects it with something fatal. (Figure 1) This is species specific, so other, beneficial bacteria are not destroyed. These viruses have been used extensively in the former Soviet Union, but are still experimental in this country. 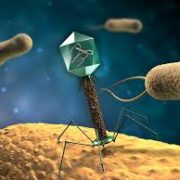 Figure 1.
A bacteriophage on the surface of a bacteria. They may look like a sci-fi space probe, but these viruses may have promise in the fight against bacterial infections that are resistant to antibiotics.\

Wound Care
Honey has long been used as a wound dressing, but until recently, its exact mechanism has been unclear. Many “all natural” compounds have been used to control infections in wounds, but honey is unique in the variety of its effects. Honey inhibits the growth of most pathologic bacterial on wounds. Open a jar of honey and leave it in your pantry for a month. You will notice that nothing is growing on the surface. Try this with a jar of grape jelly – you’ll see a biological circus appear in a couple of days. Honey turns on the immune system by attracting specific cells called tissue macrophages that clean up debris. Historically, hydrogen peroxide was used to treat wounds, but this is very toxic to healthy tissue and should never be used. Honey, in contrast, stimulates the production of enough hydrogen peroxide to kill bacteria, but in a low enough dose that will not damage healthy tissue.

Joint Therapies
Osteoarthritis is a common cause for early retirement of horses in all disciplines. In the early 1950’s, Dr. J.D. Wheat was the first veterinarian to inject healthy joint fluid into arthritic joints. He saw significant clinical improvement with this rather simple procedure. Dr. Wheat was also the first to inject cortisone into arthritic joints and his research stimulated others to discover the active compounds in joints that kept them healthy and “slippery”. One of these compounds is hyaluronic acid (HA). The combination of HA and some form of cortisone has been used to treat arthritis in horses for over fifty years with reasonable success.

Last week, a study was released suggesting that the use of HA had little or no effect on the treatment of diseased joints in horses. This study proposed that the steroid compound, not the combination, produced most of the beneficial effects of joint injection. This is significant because using steroids alone in joint treatments is relatively inexpensive, while the addition of HA can add hundreds of dollars to the price of a single treatment.

The art of medicine, how we examine patients with our five senses, hasn’t changed much since Hippocrates. He was the ancient Greek the Hippocratic Oath was named after – all doctors make this vow to “above all else, do no harm” – good luck with that! But the science of medicine, new drugs, surgeries and technology, changes every day. It is up to us to stay current as the new stuff can be really great. However, we must tread cautiously, as pioneers are sometimes found full of arrows, dead on the frontier.