Is there a link between fat, cresty-necked horses and founder/laminitis?

It’s spring! We know this because the irrigation water is flowing, there’s bugs on the windshield, the air smells like skunk, (I don’t know why skunks feel the need to perfume the air more this time of year, whether it is to let the girl skunks know there’s a new stud skunk in town, or just to aggravate the rest of us—who knows what goes through the mind of a skunk), the grass is green—and there’s lots of it! This makes our horses very happy. After living on dry hay all winter, a mouthful of fresh greens must seem like a gourmet salad. This is great for most horses, but not all of them. For some horses a few days on lush, green pasture is like a diabetic working at a candy store—the consequences can be disastrous.

We used to call these horses “easy keepers”. You know the kind: just show them some hay string and they gain ten pounds. This type of horse has a thick “crest” on the top of the neck, and often a deep crease down the center of their back you could hide a cheese burger in. If it were just a case of obesity, I guess we could live with that, after all, fat is a pretty color on a show horse. But it is not that simple. A nasty little problem called laminitis is part of this scenario.

The thyroid gland, found at the base of the throat in all mammals, has been studied for centuries. However, exactly one hundred years ago, Kendall was able to identify one of the hormones secreted by this gland and he named it “thyroxin”. This has been the focus of many research projects over the years, and the horse has recently been included.

It has long been known that hypothyroid people, those with low thyroid hormone production, tend to be more than just “pleasantly plump”. Researchers in equine medicine started evaluating thyroid hormone levels many years ago, and their measurement became a part of the diagnostic workup of the “fat horse that likes to founder” syndrome. Unfortunately, most of these tests came back “normal”. So the scientific community was elated with this revelation because they had a new disease they could name! They called this “euthyroid sic syndrome”. That means the hormone level is “normal”, but the animal (or person) is still sick. Yippee! We don’t know what’s wrong, but at least we have a name for it!

This has become a common theme in this age of nanotechnology: our ability to measure something is much greater than our understanding of it! Some very good research has been published over the last ten years which has helped clarify a rather complicated system. Thyroid hormone, while a part of this metabolic puzzle, is not the key. The subjects formerly known as “easy keepers” (horses and humans) are now referred to as “metabolic syndrome” or “insulin resistant”.

Some wild hogs on an island off the coast of Georgia have provided an unlikely source of this understanding. Apparently, somebody forgot about a few hogs they left on this island a couple of hundred years ago, but they survived without the benefit of an Ag College grad. These hogs are unique. In the wild, they did well, but “domesticated”, they became morbidly obese and developed cardiovascular disease similar to that in “fluffy” people and some even foundered! (and you thought that was just a horse disease?) The reason for this is that this group of hogs had a “thrifty” gene that allowed them to store fat during the lean times when vegetation was scarce. Unfortunately for the hogs, this gene didn’t get turned off when they were well-fed, so they developed “it-ain’t-my-fault-they-built-a-burger-joint-across-the-street-from-my-house” weight problem.

It truly isn’t a behavioral “fault”, but some horses are apparently “blessed” with thrifty genes. This, in turn, influences the metabolic function of insulin and glucose to store calories in a very efficient way. Unfortunately, these excess calories get stored in fat tissue; sometimes a mountain of it. 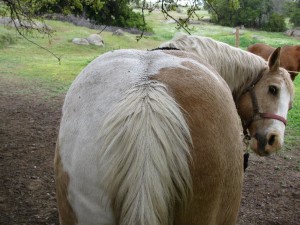 Does this halter make me look fat? Note the “not muscle” lumps over the croup. Horses add weight here last, lose it here first.

It gets more complicated. It was once believed that cardiovascular disease in people was due, in part, to extra cardiac work required to pump blood through more animal. In reality, the extra fat tissue produces a toxic substance called “leptin” that actually causes damage to blood vessels leading to cardiovascular disease. The fat, “thrifty” animal is actually poisoning itself. In the horse, the toxin damages blood vessels, especially those of the feet. This causes inflammation of the sensitive tissues of the foot: laminitis. If left untreated, the damaged tissues can no longer support the coffin bone in the foot and it sinks or rotates into an abnormal position. This produces a “dish” shape to the dorsal hoof wall. 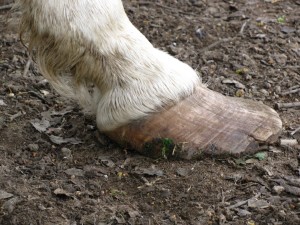 The dish shape of the dorsal hoof wall due damage to the laminae: laminitis. The terms “laminitis” and “founder” are used interchangeably, but not correctly so. Laminitis is the inflammatory disease, while “founder” is a shift in the coffin bone to an abnormal position inside the hoof capsule. 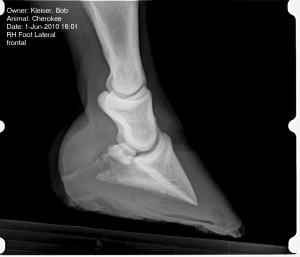 The coffin bone has “rotated”. The dorsal hoof wall and the coffin bone are not parallel. Management of “easy keepers” should be directed to preventing the devastating pain of laminitis. Obviously, this is not a problem in most horses. However, if we identify these subjects and keep them off the lush, green pastures they would love to enjoy, we can prevent the problems associated with this metabolic anomaly.